Protecting Families In North Carolina Since 2019

Get My Free Pest Inspection
Call For Immediate Service

The stuff of nightmares, earwigs burrow into your ear canal while you sleep and lay eggs in your brain. Okay, none of that is true, but now that we have your attention, let’s separate the facts from the myths that surround this tiny pest and discover the reasons why you often find it lurking in your bathroom.

How to Identify an Earwig

It’s the earwig’s appearance that makes it so creepy. Its long, slender body with six legs and rear pincers give this unwanted house guest an alienlike appearance. The earwig also has two long antennae that it uses to feel around as it searches for food and water and to detect predators nearby. More than 20 different earwig species live in the United States and range in size from 5 to 25 millimeters in length.

Most earwig species have dark, sturdy wings but cannot fly. However, those that do fly are not commonly found in your home. If you find an earwig that doesn’t have wings, it’s most likely a juvenile. Though you might find a single earwig in the bathroom, it’s not uncommon to discover several earwigs clustered together. They use a naturally producing pheromone to attract other earwigs nearby.

The Problem With Earwigs

Earwigs don’t have venom or carry diseases. In fact, they don’t bite people and will only use their pincers for defense when handled. Even then, the pinch may not break the skin. These house pests feed on both plants and other insects and become a nuisance when they gather indoors. They enter residential homes and commercial buildings through cracks in the walls and are attracted to moist areas. Therefore, you’re more than likely to find earwigs in your bathroom and kitchen than in other areas of your home.

Although earwigs don’t spread diseases, their presence is considered a nuisance as they continuously invade interior spaces. They gather outdoors in moist soil and are found in leaf piles, tree holes and compost. If you have overgrowth or moist soil around your home’s foundation, you’re at an increased risk of seeing earwigs not only in your yard but also inside where you live, eat and sleep. 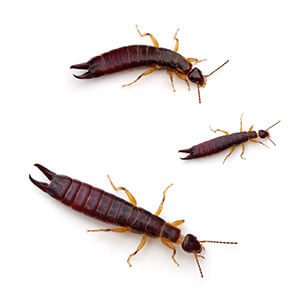 Get Rid of Earwigs

Earwigs won’t go away on their own. Once they find a consistent water source, they will always come back to it until it’s gone. Creating a dry area around your foundation is one way to prevent earwig breeding grounds. You should also seal any cracks and crevices around doors, windows and vents.

When all else fails, contact MAXX Termite & Pest Control for a free quote. We specialize in pest removal and will inspect your home for pest entryways. We’ll customize a pest control plan for your particular needs and eliminate stubborn earwig infestations in your home.

When you choose MAXX Termite & Pest Control, you can count on us to dispatch a skillful and trustworthy professional to your home. Staff members undergo thorough background checks and acquire the appropriate licenses. The technicians also receive ongoing education and training. We have adopted customer service and satisfaction as our top priorities. If you need help eliminating pests or preventing them from invading your home, please contact MAXX for a free estimate. Pests We Protect Against